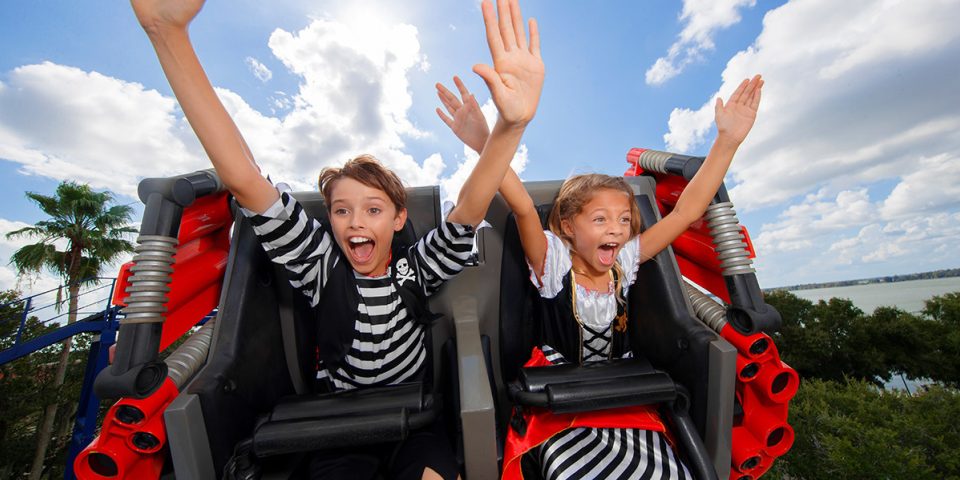 LEGOLAND® Florida Resort is inviting brick fans to #VacationLikeAPirate in 2020 with the announcement of the “Year of the Pirate” including the grand opening of LEGOLAND® Pirate Island Hotel, a jam-packed event season plus pirate-themed event days, more time to swashbuckle at LEGOLAND Water Park and a brand-new pirate water ski show.

Enjoy the “Year of the Pirate” and more event days than ever before with an Awesome Annual Pass for less than twelve dollars a month and no down payment. Awesome Annual Passes include unlimited access to the theme park, water park, seasonal events, free standard parking and discounts on retail, dining and hotel rates.

The five-story hotel will house the pirate-themed Shipwreck Restaurant with family-style dining, Smuggler’s Bar for adult swashbucklers, an entertainment area with kid-friendly nightly programming and LEGO play areas. Also, with every overnight stay, guests will enjoy a complimentary family-style breakfast. Directly outside the entrance to the hotel, a pirate shipwreck will greet guests and offer a unique photo opportunity.

The only LEGOLAND® Resort water ski show in the world, Battle for Brickbeard’s Bounty, will close after a successful eight-year run to make way for a brand new pirate adventure on April 18 with skiing acrobatics, water stunts, pirate humor and more surprises.

Sailors, seadogs and pirates of all ages can learn to walk like a pirate, talk like a pirate and vacation like a pirate in this brand-new, three-weekend event. Guests can complete an exclusive “pirate passport” while exploring resort-wide activities, meet exclusive pirate characters and run a rig with a scurvy pirate bunch following the grand opening of Pirate Island Hotel.

Other awesome openings and events in 2020 include:

LEGO® NINJAGO Days are back! Celebrate your favorite ninja heroes during exclusive in-park activities including ninja-themed yoga and LEGO builds. Plus, meet Kai, Nya, Llyod, Master Wu and for the first time ever, Zane and P.I.X.A.L. Then become the ninja in LEGO® NINJAGO® World, where kids can battle against familiar foes like Lord Garmadon and the Great Devourer aboard LEGO NINJAGO The Ride.

LEGOLAND Water Park will operate on more days beginning February 15 and remain open the same days as the theme park throughout the remainder of the year. Float along Build-A-Raft River, splash in DUPLO® Splash Safari and the Joker Soaker water playground, take a dip in the LEGO Wave Pool or speed down the Splash Out and Twin Chasers slides.

Celebrate America’s Independence over three days as the skies above Lake Eloise fill with one of the biggest fireworks shows of the year! Before the sun goes down, help create a giant U.S. flag out of thousands of LEGO bricks.

On eight select dates in July and August, guests visiting LEGOLAND® Florida Resort can revel in the ultimate The LEGO® Movie™ experience at this returning event. Included with theme park admission and select Annual Passes, fans of Emmet, Lucy, Unikitty and Benny can enjoy a complete theater to theme park experience walking the streets of Bricksburg in the park’s latest expansion, THE LEGO MOVIE WORLD.

Presented by the National Fire Protection Association, this entertaining and informative event teaches kids about fire safety with a variety of fun activities in the theme park, including information from NFPA’s annual Fire Prevention Week theme.

Celebrate the holidays the LEGOLAND way! This jolly time of year features a combination of seasonal shows, special treats, twinkling lights and more during Holidays at LEGOLAND and Kids’ New Year’s Party!

Book a “Year of the Pirate” adventure at www.LEGOLAND.com/YearofthePirate.

I-4 Ramp Closure, Detours for Construction in Deland Sunday

I-75 Lane and Ramp Closures For Bridge Repair in Ohio

Revisiting the Past, Trekking Toward the Future in Jackson County, Florida