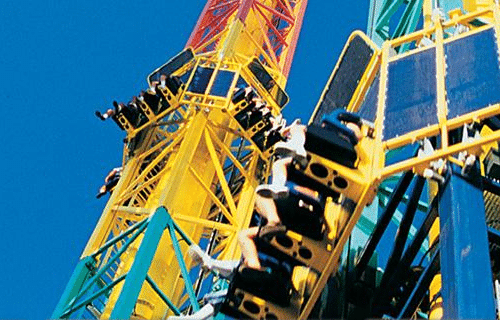 Amusement parks, water parks, family entertainment centers, museums, zoos, aquariums, science centers, and other attractions across the United States and Canada are rolling out an exciting new lineup of fun in 2015. The International Association of Amusement Parks and Attractions (IAAPA) releases its annual compilation of new attractions opening this year and highlights 2015 trends, including innovative roller coasters, guest-immersive dark rides, and experiences based on classic brands.

Roller coasters opening at theme parks from coast to coast feature the latest incarnations of the guest-favorite thrill ride. Coaster designers have once again pushed innovation to new levels as never-before-seen ways to spin, flip, and speed along the track are unveiled. This year coasters employ new track and launch technology to provide a variety of options for theme park guests.

Dark rides set to immerse guests in the realm of fiction and take them on unforgettable journeys are also opening at several parks. Dark rides typically combine graphics, animatronics, and a conveyance device (car, train, or boat) in an intricately themed indoor environment to transport guests to a different world. Some rides make the guest a part of an incredible story, as they are asked to aid their favorite superheroes, fend off undersea monsters, and more.

According to the IAAPA Global Theme and Amusement Park Outlook 2014-2018 report, more than 375 million people visit theme parks in the United States and Canada on an annual basis, contributing US$18.8 billion to park revenue.

Below are some of the exciting thrills I-10 travelers will enjoy this season:

Knott’s Berry Farm in Buena Park, California, debuts a new 3-D interactive dark ride, “Voyage to the Iron Reef.” Guests climb aboard four-person submarine-inspired ride vehicles and embark on the four-minute gaming adventure into the Iron Reef. Equipped with an interactive freeze ray, guests aim for ballooning puffer fish, an iron-clad octopus, and other exciting 3-D creatures as they attempt to save Knott’s from a watery doom. Along the way, the submarines navigate 600 feet of track and 11 scenes featuring hundreds of media-based creatures and live-action special effects. knotts.com

Legoland California in Carlsbad, California, opens the Lego Star Wars Miniland Death Star. The attraction offers guests the chance to view iconic scenes made of Lego bricks that were filmed inside the Galactic Empire’s space station. Lego models of Stormtroopers, a Rebel X-wing fighter pilot, and an Imperial Starship pilot are on display. Guests can use their imaginations to construct their own Lego spaceships at nearby building stations. Legoland also debuts Heartlake City. The new area is based on the Lego Group’s “Lego Friends” toy line, which focuses on the lives and personalities of five girls: Mia, Olivia, Andrea, Stephanie, and Emma. california.legoland.com

Six Flags Magic Mountain in Valencia, California, near Los Angeles debuts the newly created “Twisted Colossus” wood hybrid coaster. The four-minute ride takes guests along nearly 5,000 feet of track including numerous exciting features such as a “Top Gun” element, where the coaster slows as it passes through a loop. Two trains are on the track at the same time and at certain points it will appear as if they are interacting with one another, even passing through overbank turns at the same time opposite each other. The coaster also features a zero-G roll and includes two lift hills as it blends steel track technology with an iconic wooden structure. sixflags.com/magicmountain

Universal Studios Hollywood in Universal City, California, celebrates its 50th anniversary with enhancements to its Universal Studios Hollywood Studio Tour. The tour features nighttime operations where some sets such as the “Psycho” house have actors re-creating scenes, overhauled tram vehicles with ultra-high-definition monitors, and more comfortable seats. For the finale of the tour, trams go into a new 50,000-square-foot “Fast & Furious Supercharged” motion simulator, which uses a tunnel-like movie screen to create an immersive 3-D experience based on the popular movie franchise. The park also opens a “Simpsons”-themed area that brings Springfield, the fictional hometown of “The Simpsons,” to life with accompanying retail and restaurants next to the park’s existing “The Simpsons Ride.” universalstudioshollywood.com

Great Wolf Lodge Grapevine, near Dallas, Texas, unveils “The Clubhouse Crew,” a new experience where children design their own stuffed companions that help them complete challenges, solve puzzles, and investigate the mystery of the missing acorns. greatwolf.com/grapevine/waterpark

“Grizzly,” a swinging gondola with 20 seats opens at Joyland Amusement Park in Lubbock, Texas. The ride swings 360 degrees in both directions and reaches a height of 35 feet, giving riders a thrilling, weightless feeling. joylandpark.com

Six Flags Fiesta Texas in San Antonio launches “Batman: The Ride,” a 4-D spinning wing coaster that sends guests up a 120-foot elevator-type lift before releasing them on a multi-sensory journey. Riders are seated on both sides of the track as they experience six head-over-heels spins aided by new magnetic technology as well as two beyond-vertical freefalls. The ride also features a full-scale Batmobile, Bat Signal, and other special effects.  sixflags.com/fiestatexas

Six Flags Over Texas in Arlington opens “Justice League: Battle for Metropolis,” a 3-D interactive dark ride attraction in which guests take on the role of the Justice League Reserve Team and engage in a full-sensory journey with the Justice League heroes, battling against villains Lex Luthor, and the Joker. sixflags.com/overtexas

“Switchback,” the first wooden shuttle coaster to be built in more than a century, opens at ZDT’s Amusement Park in Seguin, Texas. The implementation of a switchtrack allows this coaster to run two trains simultaneously. The ride is locomotive-themed to celebrate the heritage of the park grounds. zdtsamusement.com

About IAAPA The International Association of Amusement Parks and Attractions (IAAPA) is the premier trade association for the attractions industry worldwide. Founded in 1918, IAAPA is the largest international trade association for permanently located amusement facilities and attractions and is dedicated to the preservation and prosperity of the attractions industry. IAAPA represents more than 4,800 attraction, supplier, and individual members from more than 90 countries. The association’s global headquarters is in Alexandria, Virginia, United States, and it maintains regional offices in Brussels, Hong Kong, Mexico City, and Orlando.