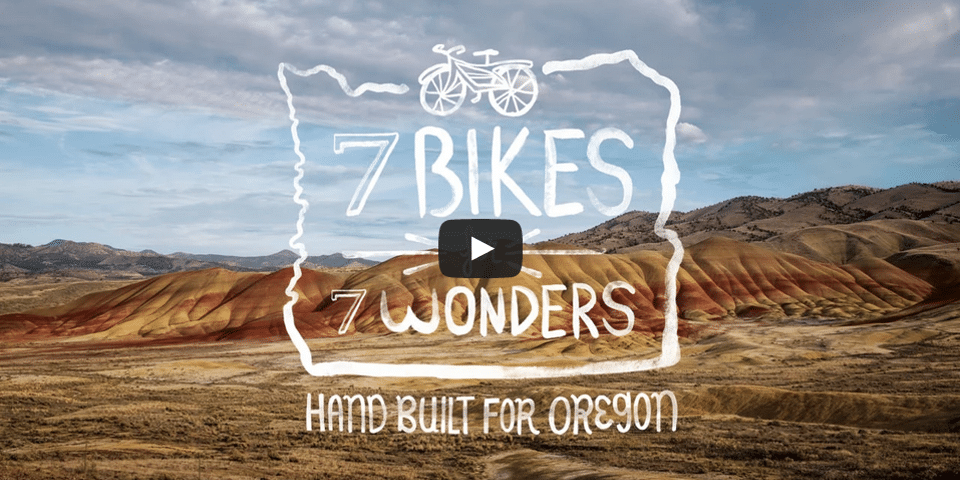 The Oregon Tourism Commission, dba Travel Oregon, invites adventurers to explore the 7 Wonders of Oregon while engaging in a statewide scavenger hunt with the launch of ‘7 Bikes 7 Wonders.’ Seven of the state’s leading bike builders were tapped to craft a custom bicycle for each Wonder, where their creation would ultimately be hidden for seven lucky contestants to find and win. Starting the week of June 15, Travel Oregon will reveal online clues to each bike’s exact whereabouts, focusing on a new Wonder each week.

In 2014, Travel Oregon hailed Mt. Hood, the Columbia River Gorge, Smith Rock, the Coast, Crater Lake, the Painted Hills and the Wallowas as the 7 Wonders of Oregon, launching what would become the state’s most successful marketing campaign ever. This summer, ‘7 Bikes 7 Wonders’ draws attention to each of the 7 Wonders’ accessibility by bike, inviting cycling enthusiasts to explore Oregon through a unique perspective of the state’s most magnificent sites.

“Cyclists have long been drawn to Oregon’s diverse geography, breathtaking scenery and varied terrain” said Governor Kate Brown. “It’s no wonder that each year bicycle-related tourism in our state contributes about $400 million to the state’s $10.3 billion tourism economy. The nexus between Oregon’s 7 Wonders and some of the best bike makers in the country will further highlight Oregon as a leader in outdoor recreation.”

“Oregon is a place for adventure, and our 7 Wonders inspire countless ways for travelers to immerse themselves in the beauty and grandeur of our state,” said Todd Davidson, Travel Oregon CEO. “With ‘7 Bikes 7 Wonders,’ we envision an unforgettable expedition with an opportunity to take home a piece of Oregon to enjoy for a lifetime. We’ve tasked seven of the state’s top bike builders with creating a custom, one-of-a-kind bicycle inspired by one of Oregon’s 7 Wonders.”

Oregon’s talented bike builders are part of the region’s entrepreneurial and builder culture, where individuals take a DIY approach to following their passions and creating small businesses that fill a niche.  Each one-of-a-kind bike reflects a Wonder from wheel to wheel. Builders delved into their Wonder’s environment, local community, ride opportunities and features, stories, folklore and cyclist experiences. From tailored mechanical specifications and components, hand-forged frames and custom paint jobs to site-appropriate gear and accessories, each bike is specifically crafted to give the rider the best possible experience of its Wonder. Plus, each bike carries a custom badge identifying the Wonder to which it is dedicated and underscoring its unique place in the world.

Each of Oregon’s 7 Wonders provides an incomparable experience for cyclists, from the views to the terrain. The builders have taken route options into consideration, developing bikes suited to conditions ranging from paved roads to trails and gravel to sand and snow:

Oregon is considered among the innovators in bicycle tourism in the U.S. In 2010, a collaboration between Travel Oregon, Cycle Oregon, and Oregon Parks and Recreation Department produced the nation’s first Scenic Bikeways program that, just five years later, boasts 12 ‘best of the best’ routes around the state. Additionally, in 2014 Travel Oregon developed the Oregon Bike Friendly Business program geared to travelers. The program provides local businesses with tips and tools on how to be bike-friendly and cater to the growing contingent of cyclist tourists – from in and out of state.

The ‘7 Bikes 7 Wonders’ scavenger hunt is part of the wider ‘7 Wonders of Oregon’ campaign that re-launched this spring. In 2014, the campaign contributed to nearly 10 percent growth in statewide lodging revenue over 2013. Plus, Travel Oregon’s fan base grew by more than 120,000, and TravelOregon.com experienced a record number of unique visitors during the campaign.

The 7 Wonders campaign inspires people to consider Oregon as a prime travel destination and encourages exploration throughout the entire state. Visitors are invited to share their photos on social media using the hashtag #TravelOregon. The best images are showcased on Travel Oregon content channels (TravelOregon.com, Facebook and Instagram) to motivate others long after the campaign concludes. In 2014, more than 86,000 photos were tagged with the #TravelOregon hashtag.